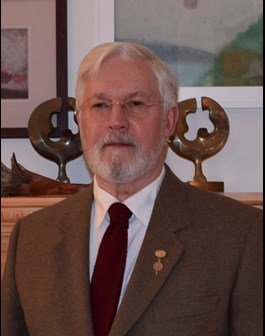 The Earl E. and Wilma S. Shepard Distinguished Service Award was established to perpetuate Dr. Earl Shepard’s outstanding accomplishments and to show appreciation for his many contributions as the first executive director of the ABO and those of his wife, Wilma, who was highly involved with her husband’s efforts to fulfill the ABO’s goals. This award recognizes an individual for outstanding dedication and advancement of the ideals and mission of the ABO.

Dr. Riolo received his doctorate in dentistry from the University of Michigan in 1967, and went on to study orthodontics, earning his master’s degree from Georgetown University in 1971. Dr. Riolo maintained a private orthodontic practice for 30 years. Teaching and writing have been a focal point in his career, both of which he continues to pursue. He has been a faculty member at the University of Detroit Mercy for many years and is currently serving as an adjunct clinical professor of orthodontics.

Dr. Riolo has been highly involved in the ABO over the course of his career. He has been a board-certified orthodontist since 1981. In 1997, he took on a leadership role within the organization by serving as an ABO director. His service culminated with his presidency in 2004-2005. From 2006 to 2008, Dr. Riolo served as an examiner for the ABO’s board examinations. “Board certification is about making you a better orthodontist,” he said. “That is what every clinician’s obligation is.”

Looking back on his experience with the ABO, he appreciates the opportunity to work with so many people who are striving to make the specialty better.

“When you interact with people who are dedicated to improving the specialty, you improve by association,” Dr. Riolo said of his time as an ABO director. “It’s a huge advantage. You have personal mentors. It makes you a better person just for the opportunity. The people around you make you successful.”